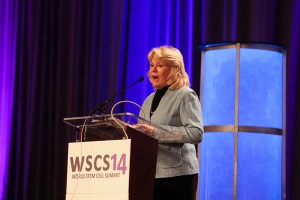 SAN ANTONIO (DEC. 4, 2014) – Conquer Paralysis Now (CPN) has launched a groundbreaking competition to cure paralysis in the next 10 years. The announcement was made by Ida Cahill, president and CEO of CPN, at the World Stem Cell Summit in San Antonio, Texas.

Former Indy Racing League driver Sam Schmidt made history last May when he returned to the Indianapolis Motor Speedway and drove a specially modified Corvette around the track – his first laps around a track since a 2000 crash paralyzed him. It was an amazing stunt, but Sam has an even bigger plan for what’s next: He and his foundation, CPN, are setting out to cure paralysis.

“We’ve done a lot of great things with the foundation in the last fourteen years, but ultimately there are still millions of people like me who are still in their chairs and it’s time to change that,” Schmidt said.

The CPN Challenge Program plans to award nearly $20 million dollars in grants and prizes, including a tentative $3 million in business and entrepreneurial awards to be announced later, over the next 10 years. The first team that can reach unprecedented improvement in every day functions of people living with chronic SCI will win the $10 million grand prize.

“We will find a cure for paralysis within the next decade, if not sooner,” said Cahill. “We have a plan and the commitment to make this happen.  Through innovative funding and collaboration, we will drive research to help others be able to hug their children and loved ones once again.”

The prize competition has been designed over the past several years by a world-renowned team of researchers and scientists. The Challenge is divided into three stages of increasing difficulty. Stage I has been launched with the ambition of providing seed funding to a wide range of non-traditional approaches. Applications are now open, with two grants of $50,000 available for each of the six categories. For more information about each of these grants and application instructions please click here.

One of the most groundbreaking parts of the CPN Challengewill be providing a centralized research platform for scientists from around the world to share both their successes and failures. By openly sharing failures, the risk of duplicating unsuccessful efforts will be diminished, driving progress in finding a cure even faster.

Conquer Paralysis Now is a 501 (c) (3) nonprofit organization with a mission to cure paralysis. The organization is leading the charge for a cure through funding scientific research, medical treatment and technological advances benefiting those paralyzed by spinal cord injuries, stroke or diseases such as ALS, Alzheimer’s and Parkinson’s or in other ways.