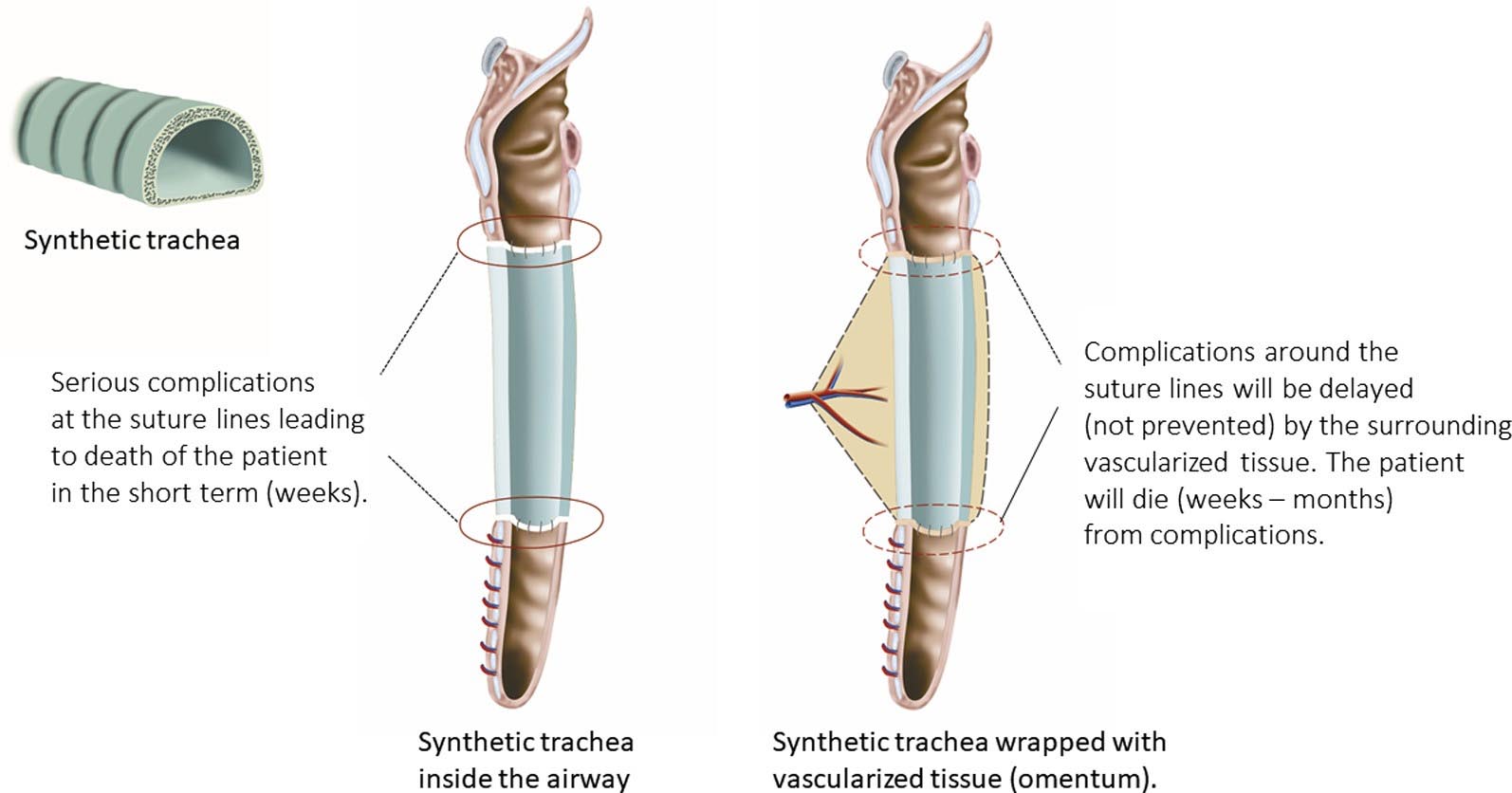 Tracheal  replacement to restore functional integrity of a long segmental defect or a complex airway stenosis remains a surgical challenge.1  A variety of surgical techniques have been reported clinically, including transplantation of autologous2  or heterologous3   tissue flaps, direct4,5 or indirect6 cadaveric tracheal allografting, and interposition of a ‘‘regenerated’’ trachea.7

In this issue of the Journal, Fux and colleagues8 from the Karolinska Institute in Stockholm publish a very detailed and well-illustrated  long-term follow-up of 3 patients who received a ‘‘bioengineered  tracheal allograft seeded with bone marrow cells’’ resulting in numerous complications and finally fatal outcome. These authors from Karolinska institute should be congratulated for their courage. However, the patients involved shouldn’t have undergone this procedure. The devastating outcome after the implantation  of a synthetic  trachea was fully predictable. In fact, the ‘‘bioengineered  tracheal  allograft seeded  with bone  marrow cells’’ was nothing more than a plastic tube.8

In 2008, a high-profile  paper was published on the first successful regeneration of the trachea.8 In this case report,

2 miracles had occurred: (1) The cells of a donor trachea had been replaced  by recipient cells after applying stem cells of the recipient to an enzymatically  treated cadaver donor trachea; and (2) The ‘‘regenerated’’  trachea could be used for airway repair without restoration of its blood supply.

The paper attracted much media attention as the first organ that could be regenerated; it was foreseen that other hollow-organ regenerations would quickly follow.9 Indeed, the engineered trachea was seen to be the first step toward other forms of organ regeneration. Classic organ transplantations with their typical side effects due to antirejection medication could then be replaced  by growing organs from the body’s own cells.

However, the problem with the tracheal  regeneration concept,  portrayed  as successful,  is that it is theoretically impossible. All requirements  necessary to consider tracheal regeneration  were lacking (Figure 1). More misleading high-profile  papers were subsequently published in Lancet as the first ‘‘regenerated’’ synthetic trachea10  and the first ‘‘regenerated’’  cadaver trachea  in a child.11  Since 2008, about 20 patients received a  ‘‘regenerated’’  trachea in different centers around the world. As could be expected, severe complications  arose, with fatal outcomes in the ma- jority  of the patients.12 The tracheal  replacements were initially published  as successful  in some patients because of the use of a stent and the omental wrapping, which de- layed the inevitable complications (Figure 2).

From the very beginning, we have tried to inform the medical world about this blatant example of  scientific deception.13,14 From 2014 onwards, 4 whistleblowers of the Karolinska Institute, and the authors of this current pa- per in the Journal,  joined us in these actions. We had to wait for a reaction  from the involved institutions until January

2016, when the scandal was exposed to a wider audience after a 3-hour documentary that was aired on Swedish national television and on BBC. The overwhelming documentary resulted from top-shelf investigative journal- ism. Quickly after its broadcasting, board members of the Karolinska Institute, including the secretary-general of the Nobel Committee, had to resign and the paper on the regen- erated synthetic trachea was retracted.15,16

This misleading story on tissue regeneration hasn’t come to an end yet. Until now, other papers on the regenerated cadaver trachea still stay afloat. Synthetic tracheas and non- vascularized donor tracheas are destined to fail. They were wrongfully used for tracheal replacement  and presented as breakthroughs in clinical tracheal tissue engineering.