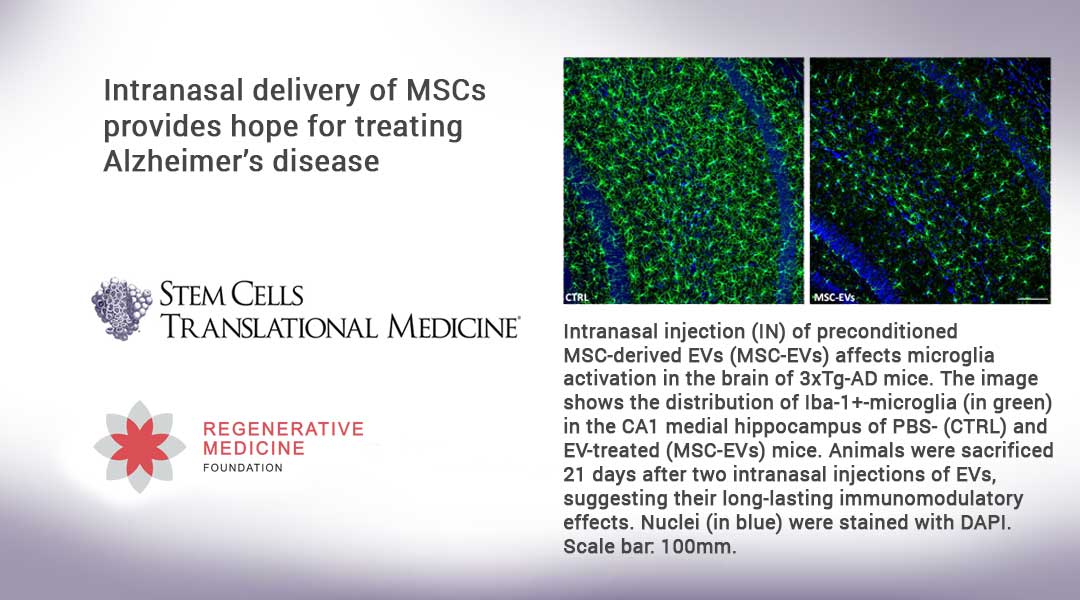 Durham, NC – In the search for a cure for Alzheimer’s disease, mesenchymal stem cells and their derived extracellular vesicles (MSC-EVs) offer much promise, thanks to their protective and anti-inflammatory properties. The results from a new study done on mice, released today in STEM CELLS Translational Medicine, strengthens this idea by showing for the first time that MSC-EVs delivered by way of the nasal passages reduce inflammation – believed to be a prime factor in Alzheimer’s disease. They also trigger actions that guard the brain’s neurons against further degenerative effects.

The study, led by Silvia Coco, Ph.D., at the University of Milano-Bicocca in Italy, lays the foundation for future studies that might point the way to a cure for this devastating disease.

Alzheimer’s is an irreversible degeneration of the brain that causes disruptions in memory, cognition, personality and other functions that eventually lead to death. Worldwide, 50 million people are believed to be living with Alzheimer’s or other dementias, according to a 2018 report by Alzheimer’s Disease International, with the cost of care estimated at over US $1 trillion.

While abnormal protein buildups in the brain called amyloid plaques are thought to play a central role in Alzheimer’s disease, mounting evidence suggests that inflammation is key to its development, too. This raises the need to target the brain’s immune cells as a way to slow down the disease’s progression.

MSC-EVs’ beneficial effects in regulating inflammation seen in Alzheimer’s have already been reported in some different studies on mice. This is due to the ability of MSCs to modulate the body’s immune system, which in turn is believed to result from the release of EVs. These nanosized, membrane-bound vesicles transport cargo — including DNA, RNA, and proteins — between cells as a form of intercellular communication. They also are thought to rid the cell of damaging substances.

In the earlier studies, MSC-EVs were administered either intravenously or directly into the fluid within the chambers of the brain (cerebral ventricles) over an extended period of weeks or months. That is where this latest study differs. Administration of the MSC-EVs was done through the nasal passages, with dosing occurring over a much shorter period of time. “We believed that the possibility to administer MSC-EVs through a non-invasive route and the demonstration of their anti-inflammatory efficacy might accelerate the chance of exploiting MSC-EVs to treat Alzheimer’s disease,” Dr. Coco said.

The team conducted their study both in vitro (outside a living organism) and in vivo (within a living organism). They began by collecting MSCs from the bone marrow of healthy human donors and preconditioning them with proteins called cytokines, to increase the MSCs’ anti-inflammatory abilities and boost their release of EVs. For the in vitro segment of their study, they added the resulting MSC-EVs to microglia – cells that mediate immune responses in the central nervous system and, as such, are targets in Alzheimer’s – isolated from newborn C57BL/6 mice. (These mice are specially bred to be used in studying diseases including Alzheimer’s.) The applications were done at intervals of two and 24 hours. The results were then analyzed 48 hours after the final application.

For the in vivo portion of the study, the research team administered two doses of MSC-EVs to a group of 7-month-old female mice with Alzheimer’s. The applications were done through the nasal passages, with the second dose occurring just 18 hours after the first. When they assessed the results 21 days later, they found that, just as they had seen with the in vitro experiments, the MSC-EVs had dampened the activation of the microglia cells in the mice brains and increased the density of dendritic spines (structures in the brain that provide cognitive resilience).

“We believe that the striking aspect of our study resides in the fact that the observed effects were achieved by only two intranasal injections of MSC-EVs delivered just hours apart,” Dr. Coco said. “This might possibly have occurred because EVs delivered intranasally could reach higher levels than those delivered by other methods.”

“Our results strengthen the view that mechanisms of action other than removal of amyloid plaques from the brain should deserve a great attention when treating Alzheimer’s,” she added. “Undoubtedly, the possibility of obtaining greater effects by repeated intranasal injections has to be considered and will be a matter for future experiments.”

“There are several important findings from this study. In the attempt to find a possible cure for Alzheimer’s disease, mesenchymal stem cells and their derived extracellular vesicles are being investigated for therapeutic purposes thanks to their protective and anti-inflammatory properties,” said Anthony Atala, MD, Editor-in-Chief of STEM CELLS Translational Medicine and director of the Wake Forest Institute for Regenerative Medicine. “The results from this study present an opportunity for potentially effective therapies to be tested by human pilot clinical trials. This work is worthy to progress forward.”

The full article, “Intranasal delivery of mesenchymal stem cell-derived extracellular vesicles exerts immunomodulatory and neuroprotective effects in a 3xTg model of Alzheimer’s disease,” can be accessed at https://stemcellsjournals.onlinelibrary.wiley.com/doi/abs/10.1002/sctm.19-0327.