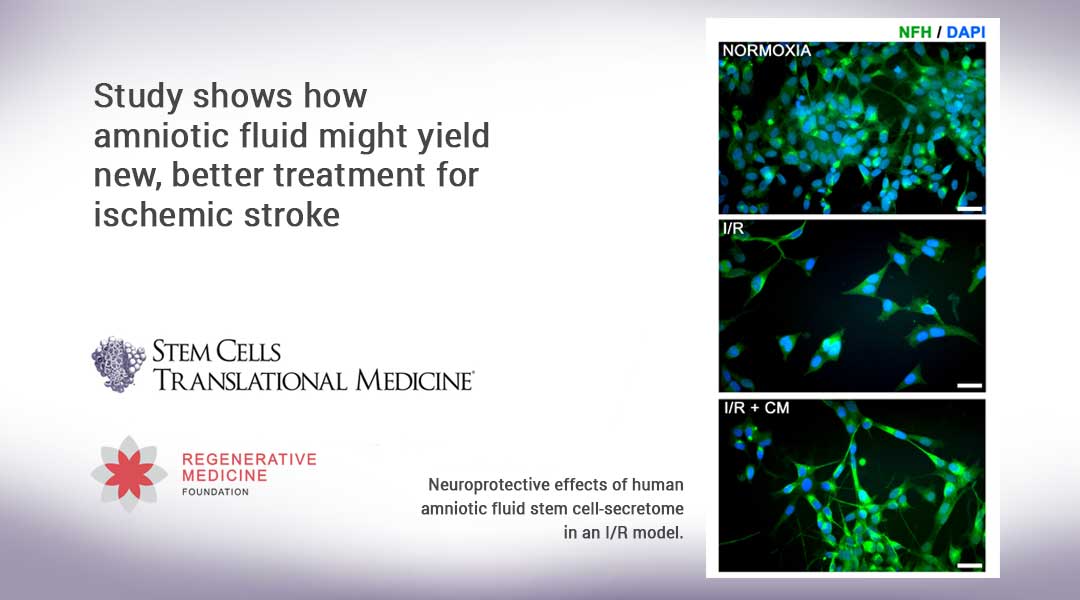 Durham, NC – A study released today in STEM CELLS Translational Medicine points the way to a possible new avenue of treatment for ischemic stroke. The study, led by Annamaria Cimini, Ph.D., of the University of L’Aquila, and Liborio Stuppia, M.D., of D’Annunzio University, Italy, reveals how the secretome of amniotic fluid stem cells can restore neuronal plasticity  (the brain’s capacity to change and adapt), improve cognition, and replace neurons damaged or lost due to an ischemic stroke.

Their finding may lead to a more broadly applicable stroke therapy that is not hindered by a narrow treatment window or pre-existing conditions.

Each year, 5.5 million people across the world die from stroke, and more than 116 million years of healthy life are lost due to stroke-related death and disabilities, according to the World Stroke Organization. Most strokes – an estimated 87 percent – are the ischemic type, which occur when a vessel supplying blood to the brain becomes obstructed.

The most effective treatment currently in use is a clot-busting drug known as a tissue plasminogen activator (t-PA). However, to be effective the t-PA must be given within three hours after the onset of stroke symptoms, and even then the cure rate is just one in 10 patients. t-PAs also have their own risks, especially for people who have a history of bleeding problems, uncontrolled high blood pressure, or recent surgery or trauma.

“Thrombolytic therapy itself can lead to brain injuries, namely cerebral ischemia/reperfusion (I/R) injury. I/R injury is one of the major reasons for disability, high morbidity, and mortality worldwide,” Dr. Cimini said. (Reperfusion refers to the act of restoring the flow of blood to an organ or tissue, typically after a heart attack or stroke.)

In the search for better treatment options, stem cells have emerged as a possible candidate due to their regenerative abilities. Human amniotic fluid stem cells (hAFSCs) in particular are interesting, as adult stem cells – even after reprogramming – might pass along any pre-existing genetic conditions, thus representing a limitation in their application.

On the other hand, hAFSCs offer a clean therapeutic slate. A novel class of pluripotent stem cells with intermediate characteristics between embryonic and adult stem cells, hAFSCs are able to safely differentiate into all types of tissue. Furthermore, ethical issues related to their use are minimal, as they are collected during routine amniocentesis, third-trimester amnio-reduction or Cesarean section.

The growing interest in hAFSCs over the past decade has led researchers to also investigate the cells’ secretome –  which encompasses the complete set of proteins expressed by cells and secreted into the extracellular space – and its potential neuroprotective mechanisms.

In their current study, the Cimini- Stuppia team wanted to determine which signal transduction pathways might be activated by hAFSC-derived secretome during a stroke. (Signal transduction is how signals are transferred through a cell via proteins – a process necessary for healing.) They also wanted to analyze miRNA expression in the conditioned medium. miRNAs found in exosomes are key regulators of the immune response that affect maturation, proliferation, differentiation and activation of immune cells, as well as antibody secretion and release of inflammatory mediators.

The team began by first devising an in vitro stroke model. To do this, they deprived hAFSCs of oxygen and glucose for three hours, period arrived at after testing several different time windows – at three hours, the cells showed a reduction in viability of about 50 percent. Then, 24 hours later, they treated the oxygen/glucose depleted cells with several different percentages of hAFSC-conditioned medium.

“When we examined the results, we found that the hAFSC-derived secretome had activated pro-survival pathways, as well as pathways that halted apoptosis (programmed cell death). Furthermore, microRNA analysis in the exosomal component revealed an abundance of miRNAs involved in protecting neurons and controlling neuronal cell death,” Dr. Stuppia reported.

“In light of the data obtained, we believe that the use of conditioned medium and, in particular, exosomes may represent a suitable treatment for I/R injury,” he concluded.

“These early pre-clinical results are certainly encouraging and demonstrate the need to further pursue human amniotic fluid stem cells-derived secretome as a regenerative cell therapy,” said Anthony Atala, M.D., Editor-in-Chief of STEM CELLS Translational Medicine and director of the Wake Forest Institute for Regenerative Medicine. “These outcomes suggest a potential approach that could change the outcome for millions of patients who suffer a stroke.”

The full article, “Neuroprotective Effects of Human Amniotic Fluid Stem Cells-Derived Secretome in an Ischemia/Reperfusion Model,” can be accessed at https://stemcellsjournals.onlinelibrary.wiley.com/doi/abs/10.1002/sctm.20-0268.