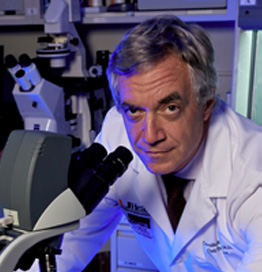 Camillo Ricordi, M.D. is Professor and Director of the Diabetes Research Institute and the Cell Transplant Center at the University of Miami, Florida. He is the inventor of the method to isolate insulin-producing cells from the pancreas, which led to successful transplantation to reverse diabetes. The procedure is now used worldwide. Ricordi’s research interests include reversal of autoimmunity, transplant tolerance, modulation of inflammation and regenerative medicine to prevent disease, and to prolong healthy lifespan (Healthspan). In 2020 he led the international team that successfully completed the first FDA approved controlled trial to treat the most severe cases of COVID-19 with stem cell infusions. The unprecedented results allowed for 100% patient survival at one month in subjects treated who were less than 85 year old, compared to 42% survival in the control group. Ricordi and his collaborators have recently launched the program www.fit4pandemic.com [fit4pandemic.com] to help the general population to prevent disease progression of the most severe forms of viral, autoimmune and age-related conditions, to prolong healthy lifespan (Healthspan). He received the Outstanding Scientific Achievement Award by the American Diabetes Association and was Knighted by the President of the Republic. In 2018 Ricordi was inducted into the National Academy of Inventors, and was appointed to the Italian Supreme Council of Health (Consiglio Superiore di Sanita’). Ricordi is the author of over 1,150 scientific publications that have been cited over 45,700 times. His H-index is 100 and as an inventor, he has been awarded 27 patents.