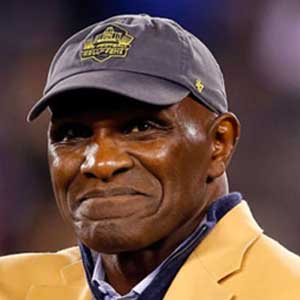 A defensive end in college, Harry Carson never missed a game in four seasons at South Carolina State. Selected by the New York Giants in the fourth round of the 1976 NFL Draft, he was immediately moved to the linebacker position in the pros. Carson won the starting middle linebacker position halfway through that rookie season and went on to be named to the All-NFL Rookie Team.

An emotional player, Carson led by example both on and off the field. He led all Giants defenders in tackles five seasons and was named to the Pro Bowl nine times, including seven straight from 1982 through 1988. His best single-game performance came in 1982 in a Monday night game versus the Green Bay Packers in which he racked up 20 solo tackles and five assists. He accumulated 14 opponents’ fumble recoveries during his career.

Carson, as an inside linebacker, was a ferocious run stopper. Known for his “all-out” style of play, he attacked onrushing blockers head on in his pursuit of the ball carrier. Later in his career when he was joined by outside linebackers Lawrence Taylor and Carl Banks, there was no better linebacker trio in the NFL. Like Taylor, he was extremely difficult to defense in blitzing situations and he had the speed and agility to be an effective pursuit player, even when the play was directed away from his area of responsibility.

In 1986, Carson finished second in total tackles for the Giants with 118 in the regular season and 23 in the playoffs. He recorded the ninth of his 11 career interceptions, had two quarterback sacks, two fumble recoveries, and two forced fumbles, as the Giants went on to defeat the Denver Broncos in Super Bowl XXI.

Although he was a very consistent player, Carson seemed to produce top performances in key games. That was the case in New York’s Super Bowl season. His interception and 12 solo tackles against the Washington Redskins on December 7 virtually assured the Giants of the NFC East title. It was also Carson who made the “big play” on the Giants’ first-half goal line stand against the Broncos in the Super Bowl, when he stuffed Gerald Willhite for no gain.