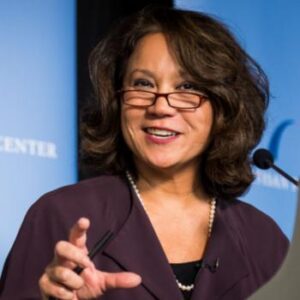 Janet Marchibroda serves as the President of Alliance for Cell Therapy Now, an independent, non-profit organization devoted to advancing the development and delivery of safe and effective cell-based therapies to patients in need. In addition to her role with the Alliance, she serves as a Fellow for the Bipartisan Policy Center, Executive Director for NFL Alumni Health, Board Member for HL7, and Co-Chair of Friends of HL7.

Marchibroda’s other roles have included serving as Director of the Health Innovation Initiative and Director of the CEO Council on Health and Innovation at the Bipartisan Policy Center, Chief Health Care Officer for IBM, Senior Vice President for Health Policy and Technology at CNI, and Chief Operating Officer for the National Committee for Quality Assurance, an organization devoted to improving the quality of health care for Americans. She also served as founder and CEO of the eHealth Initiative, a non-profit, multi-stakeholder member organization that was instrumental in advancing legislation that provided nearly $40 billion in investments in health IT. She also served as Executive Director of Connecting for Health—an initiative supported by the Markle Foundation and Robert Wood Johnson Foundation and Chief Operating Officer for the National Coalition for Cancer Survivorship. Marchibroda also co-founded and served as Chief Operating Officer of a healthcare-related electronic publishing, data, and consulting services company which was later acquired by Bertelsmann AG.

Marchibroda efforts to support the federal government have included running a large-scale project at the Centers for Disease Control and Prevention (CDC) that rapidly deployed epidemiological, clinical, and data analytics support to more than 30 local health departments across the U.S. and territories to support mothers and babies impacted by the Zika crisis; running a CDC-led public-private sector partnership devoted to improving electronic information sharing between health care providers, their electronic health records, and more than 60 immunization registries across the country; and leading stakeholder engagement activities for the National Coordinator for Health Information Technology within the Department of Health and Human Services, following passage of the HITECH Act.