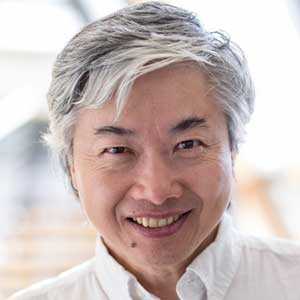 Shuguang Zhang in 2011 started to design membrane proteins, because there are ~26% genes that code for membrane protein in genomes which are crucial for both internal and external cellular communications.  He conceived a simple and elegant molecular QTY code, namely glutamine (Q), Threonine (T) and Tyrosine (Y) to systematically replace the hydrophobic amino acids Leucine (L), Valine (V), Isoleucine (I), and Phenylalanine (F) in the 7 transmembrane a-helices of G protein-coupled receptors (GPCRs).  GPCRs function similar like our mobile phones to communicate and interact with external world. The QTY code results suggest that despite 46%-56% transmembrane a-helices changes, water-soluble QTY variants still maintain stable structures and biological function, namely, ligand-binding activities. This simple QTY code is a likely useful tool and has big impact for designs of water-soluble variants of previously water-insoluble and perhaps aggregated proteins, including amyloids.

The QTY code is based on two key molecular structural facts: 1) all amino acids are found in natural alpha-helices regardless of their chemical properties; 2) several amino acids share striking structural similarities despite their very different chemical properties; for example, glutamine (Q) vs Leucine (L); Threonine (T) vs Valine (V) and Isoleucine (I); and Tyrosine (Y) vs Phenylalanine (F).  The QTY code systematically replaces water-insoluble amino acids (L, V, I and F) with water-soluble amino acids (Q, T and Y) in transmembrane α-helices. Thus, it changes the water-insoluble form of membrane proteins, including GPCRs, into a water-soluble form.  Despite substantial transmembrane domain changes, the QTY variants maintain stable structures and ligand-binding activities. His lab has been successful in designing water-soluble variants of membrane proteins.

Shuguang Zhang is at MIT Media Lab, Massachusetts Institute of Technology. His current research focuses on designs of biological molecules, particularly proteins and peptides that are short fragment of proteins.  He received his B.S from Sichuan University, China and Ph.D. in Biochemistry & Molecular Biology from University of California at Santa Barbara, USA. He was an American Cancer Society Postdoctoral Fellow and a Whitaker Foundation Investigator at MIT. He was a 2003 Fellow of Japan Society for Promotion of Science (JSPS fellow). His work of designer self-assembling peptide scaffold won 2004 R&D100 award. He won a 2006 Guggenheim Fellowship and spent academic sabbatical in University of Cambridge, Cambridge, UK.  He won 2006 Wilhelm Exner Medal of Austria. He was elected to Austrian Academy of Sciences in 2010. He was elected to American Institute of Medical and Biological Engineering in 2011 and elected to US National Academy of Inventors in 2013. He won the 2020 Emil Thomas Kaiser Award from the Protein Society.  He published >170 scientific papers that have been cited over 33,000 with a h-index 85. He is also a co-founder and board member of Molecular Frontiers Foundation.  Molecular Frontiers Foundation organizes annually Molecular Frontiers Symposia in Sweden and around the world. The Foundation encourages young people to ask big and good scientific questions about nature. The selected winners will be awarded for Molecular Frontiers Inquiry Prize.